Some examples of work sites
"

Built between 1926 and 1929 by the architect Joseph Hiriart, the Villa Leïhorra, located in the town of Ciboure, has survived in its original state with its emblematic decorations of the Art Deco movement in the Basque Country. The beauty of the mosaics, especially the one with motifs on the ground floor of the villa, contribute to its fame.

For several decades these pavements were subjected to the bad weather of the region's oceanic climate, which weakened the screeds, and then to increasing trampling of the floors by visitors. In fact, the mosaics suffered from lifting, and cracks appeared, leading to partial loss of the decoration.

The various mosaics were then removed. They were transported on wooden panels to the workshop for restoration. Consolidation of the edges of the removed modules was carried out to maintain the whole and particular attention was paid to the treatment of cracks. A general cleaning of the porcelain stoneware tiles was also carried out. 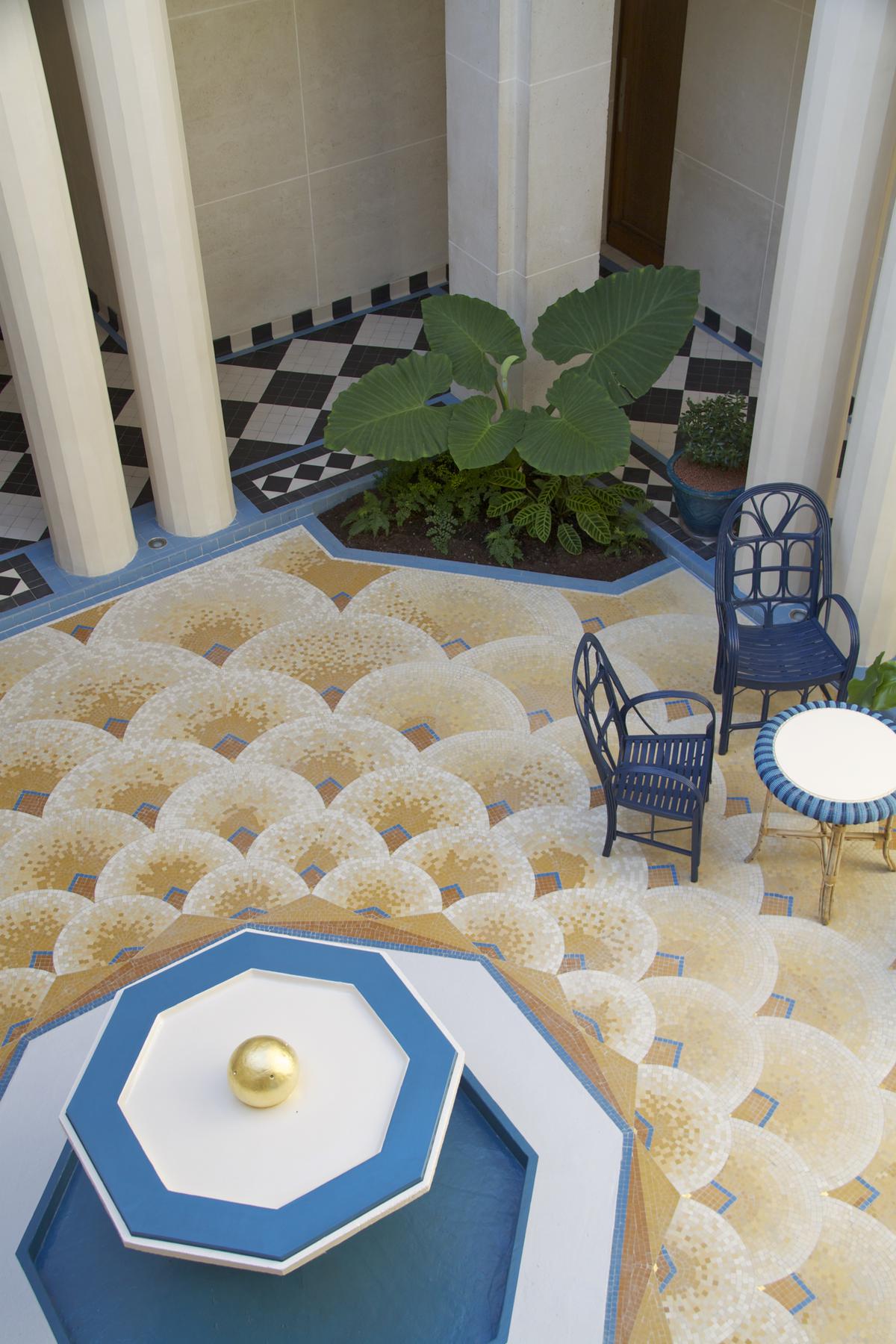 The Louxor is a cinema located in the 10th district of Paris, built by the architect Henri Zipcy and inaugurated in 1921. Transformed into a nightclub in the 1980s and then abandoned, it has finally been completely renovated and returned to its original purpose. The mosaics of the Luxor were damaged: some decorations, considered out of fashion in the 1960s, were covered up and work was required to restore these missing parts.

SOCRA therefore intervened to restore the missing areas, in particular the scarab frieze of the large cornice that existed on the boulevard de La Chapelle wall, the torus and, on the Magenta side, all the intermediate friezes with geometric motifs.

The church of Saint-Martin de Layrac

The Church of Saint-Martin in Layrac dates from the 12th century. Research into the ancient level of the floor has brought to light the remains of a mosaic. It dates from the consecration of the church by Pope Urban II, in the decade preceding 1096, or even from the time of the first church built between 1064 and 1072. It depicts Samson, a judge of Israel and a biblical character, killing a lion with his bare hands, as well as geometrical motifs and polychrome decoration.

The Layrac mosaic was in a precarious state due to multiple factors: biological colonisation, high humidity and traces of salt and previous restorations.

SOCRA intervened on site to cover all the mosaics with canvas, remove them and transfer them to aluminium honeycomb panels before a restoration in the workshop to give the mosaics back their brilliance and, above all, to improve their long-term conservation. 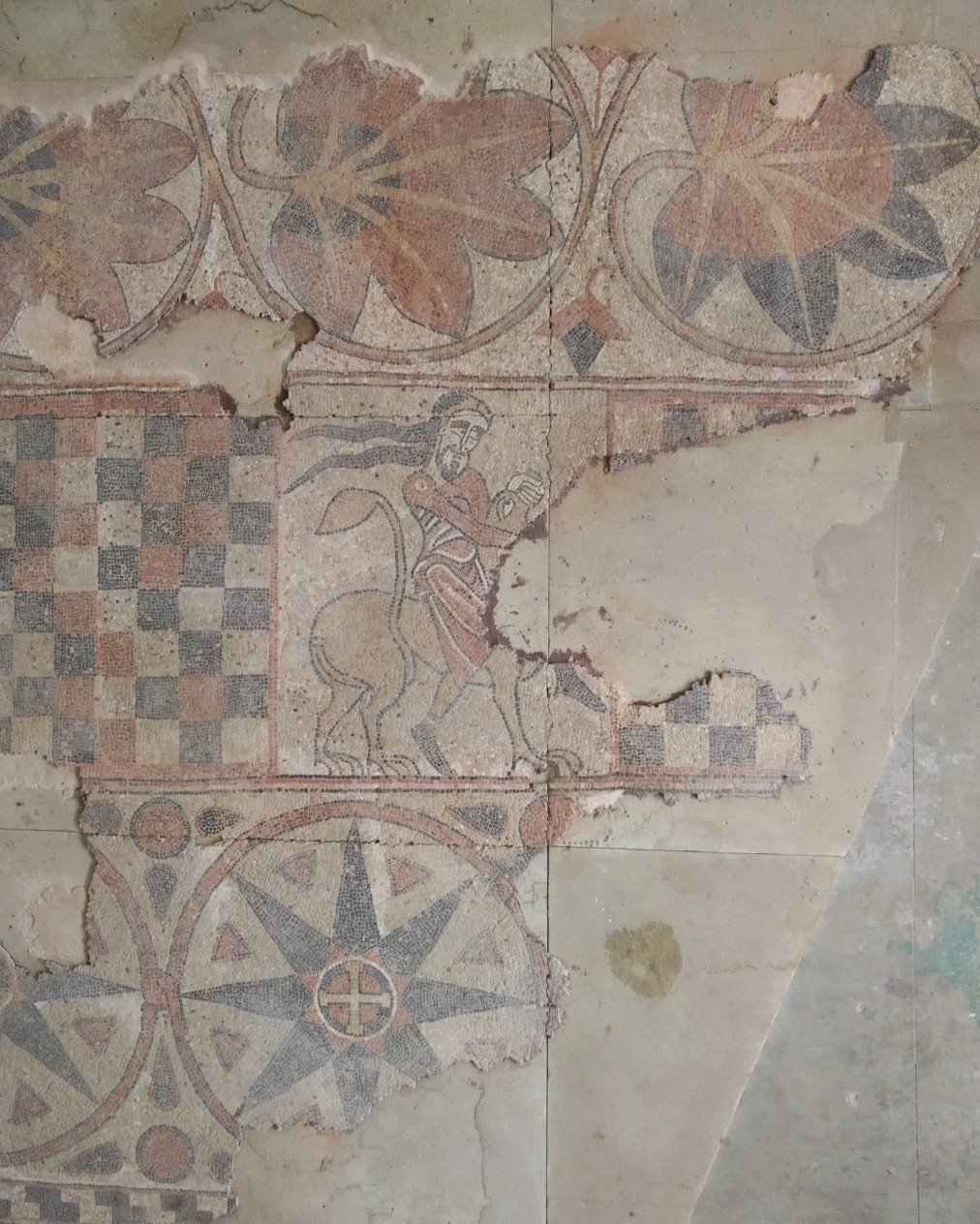 The Gallo-Roman villa at Séviac was one of the largest and most luxurious residences in southwestern Gaul. A monumental palace of 6,000 m2, the villa owes its fame to its magnificent polychrome mosaics, which depict geometrical and ornamental motifs on nearly 625 m2.

SOCRA intervened to restore 350 m2 of mosaics. The first step was to mark out the removal panels following the mosaic patterns. The mosaics were then covered with canvas to maintain the cohesion of the mosaic carpet before the panels were removed, turned over, restored and then put back in the workshop on aluminium honeycomb panels. The junctions between the panels were then filled in with tesserae collected during removal. The mosaics were re-laid on site on a thin lime screed. This operation gave the mosaic stability and isolated it from rising damp.

The Fernand Léger Museum in Biot in the Alpes Maritimes has a glazed ceramic caisson decoration on its façade. The decorations presented threatening disorders, which justified their placing in safety under a protective net.

SOCRA intervened in three stages. Firstly, a digital survey based on photographic images made it possible to obtain, once assembled, a three-dimensional view of the decoration. Next, a diamond disc was used to cut away the ceramic decoration. Finally, the restoration in the workshop consisted of manually removing the mortar residues, filling in the gaps in the caissons and recreating certain elements. A special fixing system was required for the re-installation. 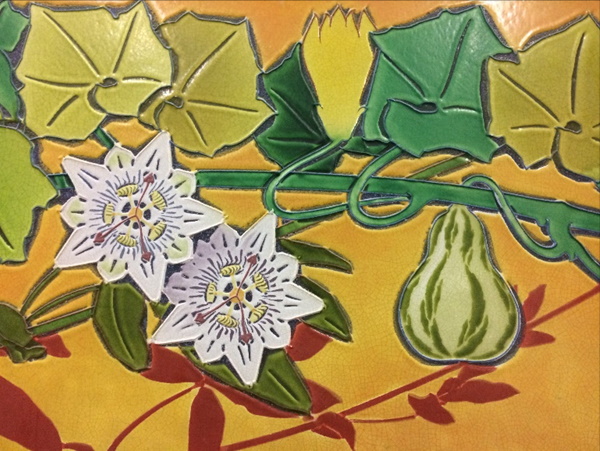 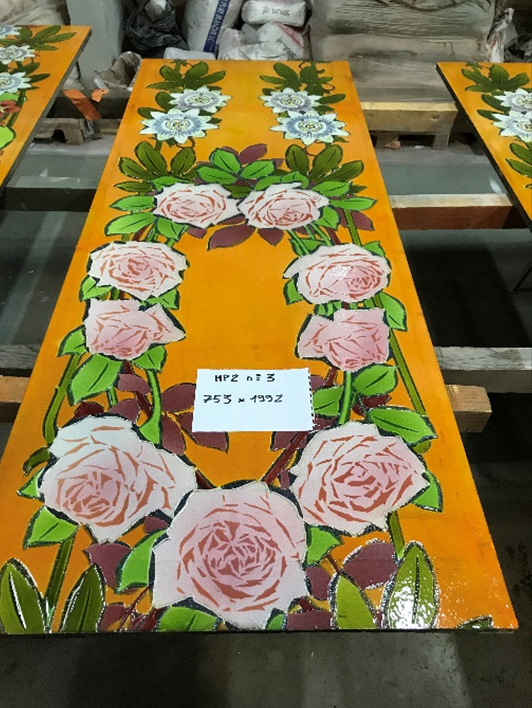 Enamelled lava of the Samaritan

The Samaritaine No. 2 shop, an emblematic department stores' of the capital, is the building in France with the most enamelled lava: nearly 675 linear metres. These yellow enamelled lava tiles, with floral decorations, make it a recognisable shop for all Parisians.

The enamelled lava, which adorns the façades of the rue de la Monnaie and the rue de l'Arbre sec, was covered with paint and was in a degraded state of conservation, with many fragile or broken elements, and nearly 80 metres of linear to be recreated.

The restoration began with the removal of the plates, which were transported to our workshop. They were restored to their original state. For the plates to be recreated, SOCRA had lava cut in a hand-extracted lava quarry (at Mallet in Volvic, in the Puy de Dôme). Once the lava was cut, it was sanded to obtain a perfectly flat surface. An enameller then recreated the decoration, using the same cloisonné enamel technique to get as close as possible to the appearance of the ancient lava.

The AK Saray, or "White Palace", is located in the north of the city of Shahrisabz. It was built between 1380 and 1404 by craftsmen from all over the Timurid Empire (Iran, Uzbekistan), which Tamerlane had just subdued. 600 m2 of pavements and basins decorated with glazed ceramic tiles were discovered in the 1970s. A Franco-Uzbek partnership allowed experts to intervene on the pavements showing a significant state of deterioration, inside the palace, at the foot of the west and east pylons. 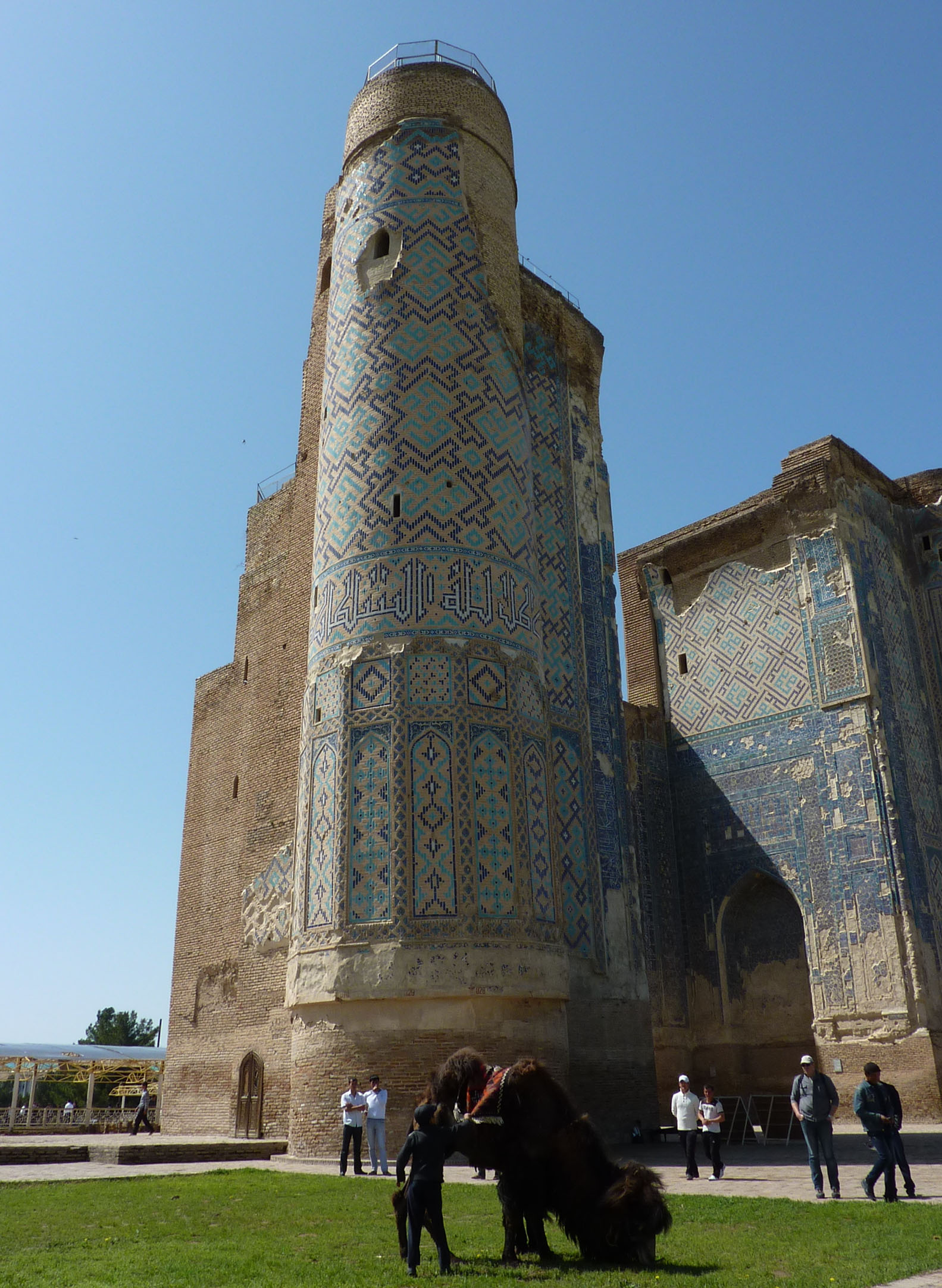 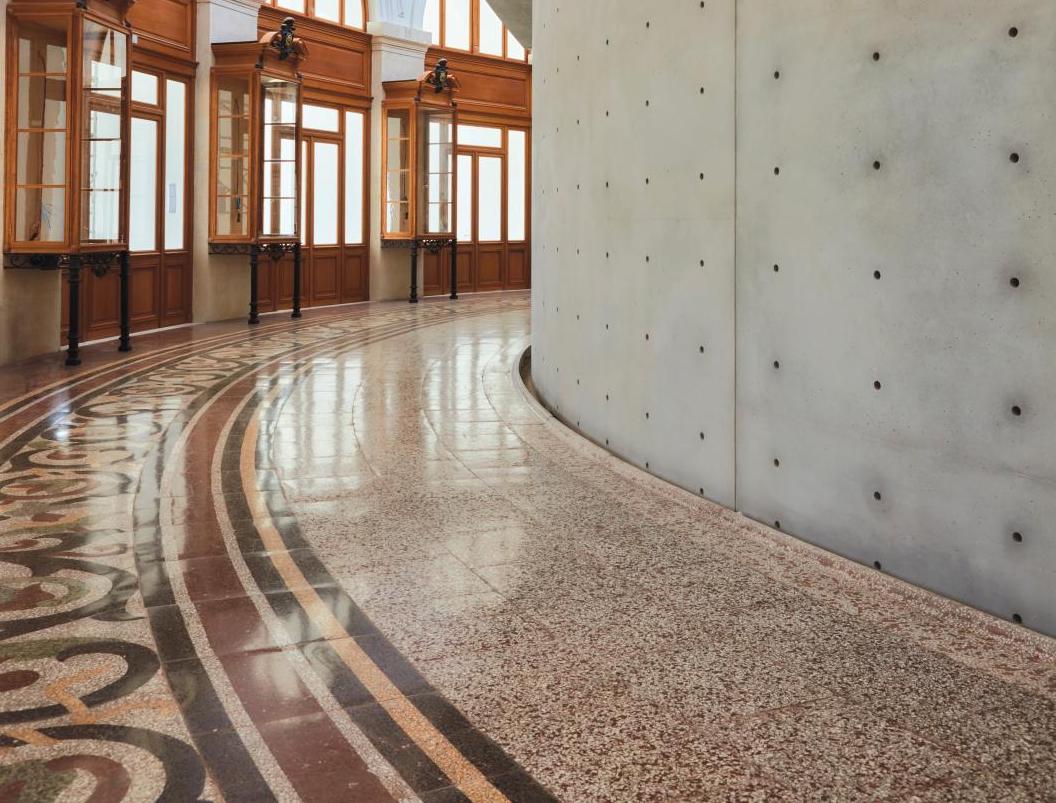 The Bourse du Commerce is an emblematic building in the capital. As part of the rehabilitation of the building into a museum dedicated to contemporary art and François Pinault's collection, SOCRA provided its expertise to restore the building's floor, a mosaic known as granito, named after the marble fragments that make it up.

We removed the 3,500 granite slabs and then cleaned and restored the slabs in the rotunda.